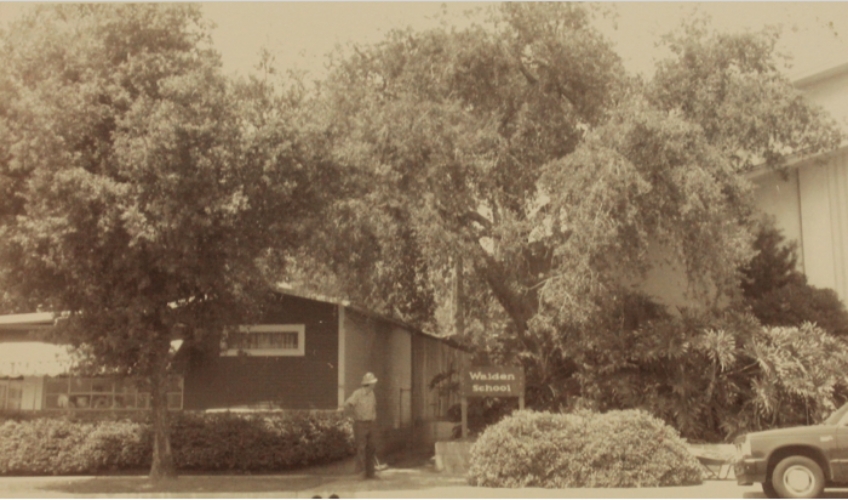 Walden School was founded in 1970 by Marilyn Nikimaa and Ted Calleton as a non-profit, independent, co-educational, elementary school with a Montessori base and multi-age classrooms. In 1976, Walden was accredited by the California Association of Independent Schools.

Through 1989, located in leased space in the basement of a church in Pasadena, Walden School enrolled approximately 100 students in Pre-Kindergarten through 6th grade. Our Walden Agreements, still in use today, were developed during this period to help guide the quality of relationships expected at school.

In late 1989 the school faced two huge challenges. First, after 20 years of dedicated and inspired leadership, Marilyn Nikimaa retired. Second, Walden lost the lease on the church space in which it was located. While the search for a new Director was begun, an extraordinary group of school parents purchased property on South San Gabriel Blvd, which is now the South Building of our current campus. Together, the Board of Trustees and parents arranged the financing and renovation and transformed the building into Walden’s first permanent dwelling. The school immediately expanded during its first year at the new site and enrolled 150 students.

In 1992, Dr. Carol Per Lee was announced as Director, bringing stability and direction to Walden's philosophy, program, and community. In 1999, Walden continued its growth and purchased the adjacent building to expand our campus to its current size. In 2004, Dr. Per Lee retired after 12 years marked by growth, modernization, and transformation. A highlight of her legacy includes the establishment of Walden's Storyteller in Residency program with Dr. Milbre Burch. This unique program is thriving today and emphasizes Walden's 20-year commitment to developing each child's personal voice through storytelling.

In July 2005, Matt Allio was appointed as Director and served until 2016. His time at Walden brought vigor and stability to the campus. With a strong administrative team and faculty in place, he spearheaded the expansion of the math and writing programs, the alignment of the curriculum, significant campus enhancements, and the development of significant professional education programs. Additionally, Walden received the maximum terms of accreditation from CAIS and WASC twice. The Walden community is thankful for Matt's many accomplishments and growth of the school during his decade of service. Director of Studies Terra Toscano, previously serving as Interim Director, was appointed Head of School in November 2016, ushering in a new era of leadership at Walden School.

Today, Walden proudly serves 200 students in Pre-Kindergarten through 6th grade in 12 classrooms complemented by our Art Studio, Science and Technology Laboratories, a 9,000 volume Library as well as our prized Toby Hayward Community Room. In addition, in Spring 2006, we proudly unveiled our renovated North Playground and Pre-K yards, providing playful and beautiful outdoor spaces for the entire school community.

Throughout Walden’s history, the educational philosophy has remained firmly rooted in its founding. The philosophy is based on the belief that successful learning requires a strong academic program that respects each child’s pace and individual style of learning. The values that underlie the program are academic excellence, self-discipline, environmental awareness, personal responsibility, and confidence. Walden nurtures these values in a warm, caring and flexible environment.